South America’s Prospective by Ellsworth Dickson, Published by Resource World on May 11, 2018

With the impending advent of the widespread use of electric cars, trucks plus the millions of rechargeable consumer electronic devices that utilize lithium ion batteries, it is no wonder that numerous exploration companies have turned their attention to the vast Lithium Triangle in Argentina, Chile and Bolivia. It has been estimated that South America’s Lithium Triangle hosts about 54% of the world’s lithium resources. 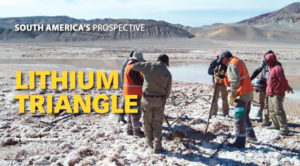 Most of the world’s lithium has been produced by an oligopoly of producers – often referred to as the Big Three – Albermarle Corp. [ALB-NYSE], private Sociedad Quimica y Minera de Chile (SQM), and FMC Corp.

There are two sources of lithium – hardrock (the mineral spodumene) and lithium brines that formed in desert climates where there is a slow inflow of lithium and other metals and salts but no outflow. Gradual evaporation over thousands of years slowly increases lithium grades to an economic level.

A recent report by Global Market Insights, Inc. concluded that the global lithium ion battery market is set to surpass US $60 billion by 2024 with a global market of 534,000 tonnes of lithium carbonate by 2025. Some lithium mining operations are already producing the world’s lightest metal from brines. In partnership with Toyota Tsusho Corp. and JEMSE, Orocobre has built and is now operating the world’s first commercial, brine-based lithium operation constructed in approximately 20 years. During 2016, Argentina’s two working mines produced 11,845 tonnes of lithium carbonate, or approximately 6% of global output. For 2017, output is about 17,500 tonnes. 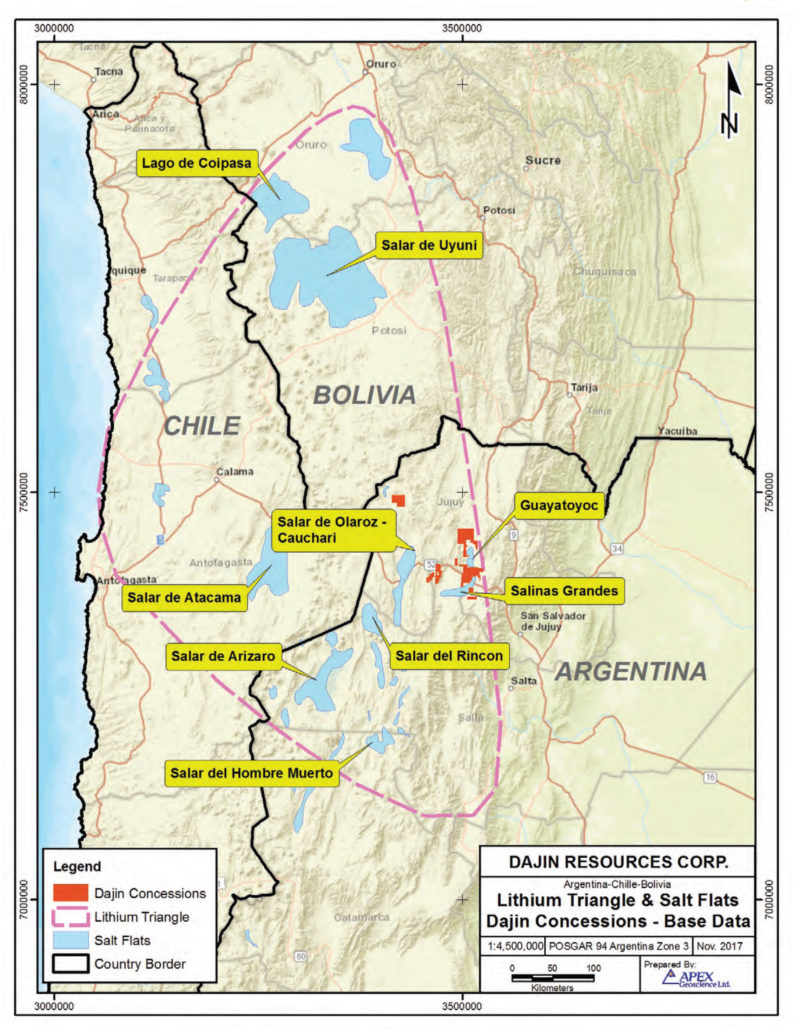 In Chile, the Salar (Spanish for salt lake) of Atacama, contains about 27% of the world’s lithium reserve base and provides almost 30% of the world’s lithium carbonate supply. Chile is the most advanced country with regards to lithium extraction, followed by Argentina. On the other hand, it is early days for Bolivia. During a recent presentation in Vancouver, Cesar Navarro Miranda, Minister of Mining and metallurgy for Bolivia, told the audience that the mining sector supports 37% of his country’s population. His government is keen to attract foreign exploration and mining companies by offering various incentives as well as political and economic stability.

Argentina, which already produces about 12% of the world’s lithium, is also keen to attract international mineral explorers. At a recent presentation in Vancouver, Ing. Mario Osvaldo Cappello, Undersecretary of Mining Development and Mining Secretariat for the Argentina Ministry of Energy and Mining, said, “Since February 2016, when President Mauricio Macri took power, export taxes on minerals have been eliminated. There’s a unified currency exchange with a streamlined process. The import of equipment for parts and mining are non-taxed and we also have a free flow of currency. In December 2017, Congress enacted two new laws, so all the investments for the construction of a project will have the VAT refund after six months.”

Joseph Grosso, a director of Argentina Lithium & Energy, and an officer of Golden Arrow Resources and Blue Sky Uranium, all with projects in Argentina, has been active in the country since 1993. In addition, to being part of a team that made mineral discoveries, he has been a pioneer in developing the Argentine mining industry.

There is a major question that haunts lithium explorers, miners and lithium stock investors. While increasing demand has boosted lithium prices from US $350 to $3,000 per ton in the past five years, there is uncertainty as to how quickly and how much the electric vehicle market will require.

With so many lithium explorers out there seeking economic deposits, plus lithium producers ramping up production, there is no doubt there will be a great deal of lithium supply available. Will that result in an oversupply that will drive lithium prices down? A recent Morgan Stanley report thinks so. 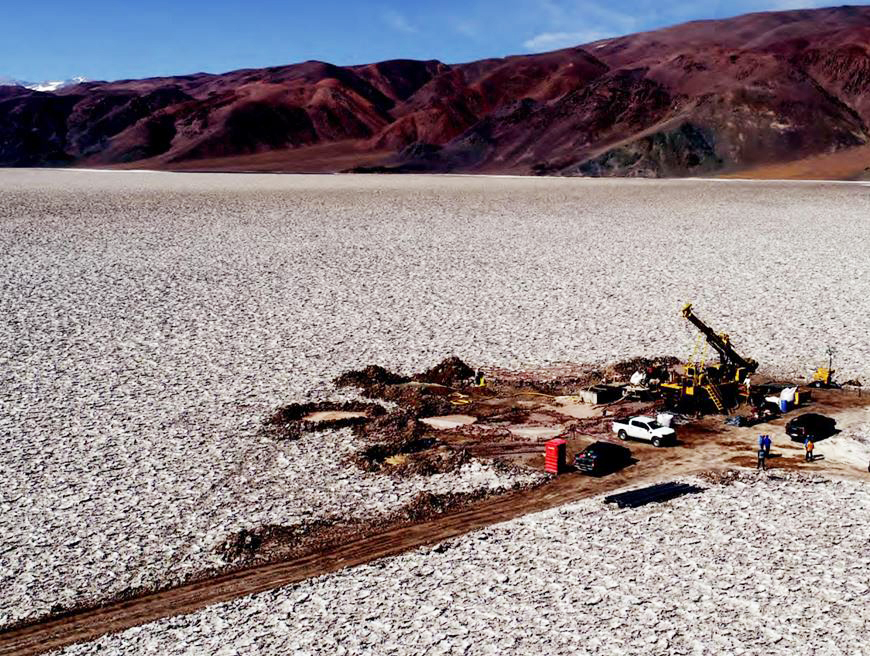 On the other hand, major auto manufacturers such as Volvo, Volkswagen and the China’s BYD are betting on mass acceptance of electric vehicles, each with their 30 kilograms of battery lithium, as vehicle prices come down and range anxiety issues are solved. Here is a pertinent question: if the Tesla Semi electric truck is successful, and other sizes of electric trucks are successful too, could this lead to tremendous worldwide sales of trucks? For example, there are some 15.2 million trucks in the US alone with 2 million of them being Semis. Translate that to the rest of the world and the numbers are huge. So what will lithium demand be as well as the demand for the other battery minerals such as cobalt, manganese, copper and graphite?

Below are details on companies active in South American Lithium Triangle.

AIS Resources Ltd. [AIS-TSXV; AISSF-OTCQB]
AIS reported seismic testing has detected three distinct aquifers over a broad area at its Chiron Project in the Pocitos Salar, Salta Province, Argentina. AIS has also completed the mass balance chemistry and process engineering that will be used to determine the raw materials used to purify the lithium brines from its Guayatayoc Project. The data will be used in the design, engineering, and construction of an 810,000 tonne lithium carbonate plant. The analysis used fractional crystallization and ion exchange resins to purify the lithium carbonate to higher than 99.5% lithium carbonate. The work was conducted in Salta and will be replicated at Guayatayoc to ensure that the reduction in air pressure has no material impact.

Advantage Lithium Corp. [AAL-TSXV; AVLIF-OTCQX] has received encouraging assays from its 75% owned Cauchari Project in Jujuy Province, north-west Argentina, about 20 km south of Orocobre’s flagship Olaroz lithium facility. At a brine flow rate of 19 litres/second, there was 515 milligrams/litre lithium and 4,577 milligrams/litre potassium in hole CAU11 in the SE sector.

David Sidoo, President and CEO, said, “This excellent flow rate and lithium grade in hole CAU11 confirms the potential of the SE sector, with the drilling program continuing to provide additional information on the salar geology and brine both laterally and at depth.” The company has 100% interests in five other projects in Argentina.

Alba Minerals Ltd. [AA-TSXV; AXVEF-OTC] is exploring its 2,421 hectare Quiron II property in the Pocitos Salar, Salta Province, Argentina. The company identified a probable lithium brine aquifer at the road accessible Quiron II property through interpretation of a Vertical Electrical Sounding (VES) survey. Alba has an option to earn a 100% interest in the 2,843 hectare Chascha Norte Project in the southeastern part of the Salar de Arizaro, Argentina, the largest yet unknown Salar in this district.

Argentina Lithium & Energy Corp. [LIT-TSXV; PNXLF-OTCQB; OAY1-FSE] has an option to earn a 100% interest in the 20,500 hectare Arizaro Project in northwest Argentina. The road accessible project is near power and rail. Geochemical, electrical surveys and three test holes have been completed. The company has a 100% interest in the Incahuasi Project in Catamarca Province, Argentina with another 10,000 hectares under application. These projects are being prepared for drilling programs. 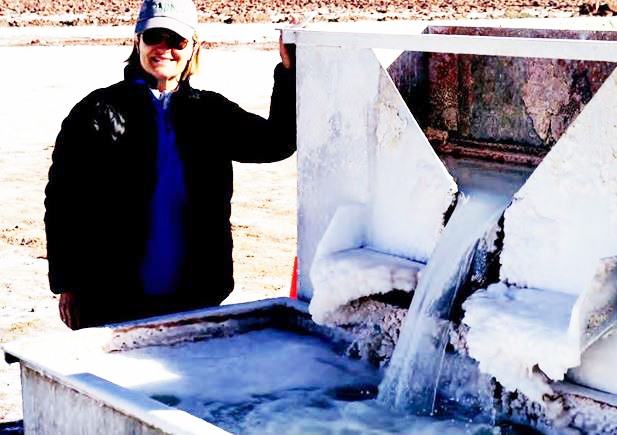 Dajin Resources Corp. [DJI-TSXV; DJIFF-OTC; A1XF20-FSE] has a strategic partnership with LSC Lithium Corp. in Argentina and has over 93,000 hectares of land holdings. Under the agreement, LSC Lithium has access Enirgi Group’s state-of-the art Direct Xtraction Process (DXP) technology for lithium brines The Enirgi Group has a demonstration plant at Salar del Rincon, Argentina that produces lithium carbonate. Surface sampling on the Salinas Grandes LSC/Dajin JV property of San Jose/Navidad has been completed. Surface pit sampling was conducted as part of the first phase of exploration. High grades were confirmed with concentrations ranging from 281 milligrams per litre (mg/L) to 1,353 mg/L lithium, averaging 591 mg/L. A total of 60% of assays were over 500 mg/L lithium and 8% over 1,000 mg/L.

FMC Corp. [FMC-NYSE] reported that its lithium segment earnings were US $44 million for Q4 2017, up 107% versus Q4 2016. The company produces lithium from the Salar de Hombre Muerto salt flat in northern Argentina.

Galaxy Resources Ltd. [GALXF-OTC; GXY-ASX] is advancing the Sal de Vida (Salt of Life) deposit in northwest Argentina, one of the world’s largest and highest quality undeveloped lithium brine deposits with significant expansion potential. In April 2013, Galaxy released a Definitive Feasibility Study which supports a low cost, long life lithium and potash operation. The study estimated a pre-tax Net Present Value of US $645 million (US $380 million post-tax) at 10% discount rate. Sal de Vida has the potential to generate total annual revenues in the region of US $215 million and operating cash flow before interest and tax of US $118 million per annum at full production rates.

Lithium Chile Inc. [LITH-TSXV] has identified a 60+ km2 lithium brine target area at its Helados Project in Chile. The openended, low resistivity zone was discovered by transient electromagnetic surveys within the northwest-trending axis of the Salar Tara Laguna Helada basin. This area displays the same characteristics as the lithium-rich principal aquifers at Salar de Atacama, home to the world’s largest and highest-grade lithium brine mine. The company is preparing for an ini-tial drill program.

LiCo Energy Metals Inc. [LIC-TSXV; WCTXF-OTCQB] is earning a 60% interest in the 160 hectare Purickuta Project and is one of a few “exploitation concessions” granted within the Salar de Atacama, Chile. The property is contained within an existing exploitation concession owned by SQM, and is approximately 3 km north of the exploitation concession of CORFO (the Chilean Economic Development Agency). About 22 km southeast of Purickuta, both SQM and Albemarle have large-scale production facilities within the CORFO concession which collectively produce over 62,000 tonnes of lithium carbonate equivalent annually and accounts for 100% of Chile’s current lithium output.

Lithium Americas Corp. [LAC-TSX, NYSE; LACDF-OTCQX] has a 50/50 JV (Minera Exar) with SQM to develop the Caucharí-Olaroz lithium project in Jujuy, Argentina. The Cauchari-Olaroz pond layout and design have been completed with the pond contractor mobilized at site and production pond construction scheduled to start shortly. Minera Exar has reviewed the development schedule for Cauchari-Olaroz and expects first production to begin in 2020.

Neo Lithium Corp. [NLC-TSXV; NTTHF-OTCQX] has discovered a new aquifer at depth at its 3Q Project in Catamarca Province, Argentina. “It adds considerable blue sky to the 3Q Project,” said Waldo Perez, President and CEO. This season, the company focused on completing infill drilling and getting into the deeper part of the basin. The company also reported that processing studies have achieved concentration levels of 3.8% lithium brine solely through solar evaporation – no costly additives were required, plus calcium chloride precipitates through crystallization and in the process captures water molecules within the crystals – both of these represent important developments for the project.

NRG Metals Inc. [NGZ-TSXV; NRGMF-OTCQB; OGPN-FSE] has awarded a contract for the initial diamond drilling at its Hombre Muerto North lithium project in Salta Province, Argentina, to AGV Falcon Drilling SRL. The initial phase of drilling will consist of three core holes up to a maximum depth of 400 metres depending upon results obtained. Drilling is expected to start early April. The project is located at the northern end of the prolific Hombre Muerto salar, adjacent to FMC’s producing Fenix lithium mine and Galaxy Resources’ Sal de Vida development stage project. The Fenix Mine is the largest producing lithium mine in Argentina and the Sal de Vida Project is the largest devel-opment stage lithium project in the country.

Orocobre Ltd. [ORL-TSX; ORE-ASX] is the newest brine based global lithium carbonate supplier through its flagship operation, Salar de Olaroz. Measured and indicated resources are 6.4 Mt LCE capable of sustaining current continuous production for 40-plus years with only ~15% of the defined resource extracted. Orocobre also has a 35% interest in Advantage Lithium.

Ultra Lithium Inc. [ULI-TSXV; ULTXF-OTC] has received assay results of the second round of sampling work carried out in December 2017 on the Salar Laguna Verde discovery zone in Catamarca Province, Argentina. Assay results indicate lithium values in the range of 34.2 to 1,270 milligrams/litre or parts per million (ppm), magnesium values less than 1 ppm to 7,920 ppm, potassium 804 ppm to 15,800 ppm, and boron 65.5 to 2,190 ppm.